Taphophile Tragics - The John who became a Jane - Jane Neighbour 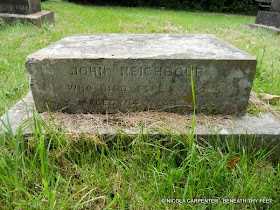 
I had to admit that this particular grave stone had me stumped, until I discovered I was researching the wrong person.  This is not the gravestone of John Neighbour, but his wife Jane.  The top portion of the gravestone with her dedication is missing.

Jane Neighbour was born Jane Willis in Hambledon, Berkshire (now Hampshire) in 1844.  I have been unable to locate Jane before her marriage to John H Neighbour, a gardener, in Henley in 1862.  In 1863 their first son Joseph is born in Henley, a second son Walter is born in 1867 in Aldershot, Hampshire, followed by a third son Henry in 1870.

In 1871 John and Jane are living in Aldershot, Hampshire along with their sons, Joseph, Walter and Henry and Ann, John's widowed mother.

On the 1881 Census, John and Jane can be found living in Boyne Hill Lane, Maidenhead, Berkshire, with their two sons and John's elderly mother, Ann Neighbour.  At that time Jane's occupation is listed as a laundress.

In 1884 a daughter, Lucy was born in Maidenhead, Berkshire, followed by a sister Emily in 1886.

1891 not only sees the family moved to Bridge street in Maidenhead, but an occupation change for John, who is now the licenced victullar of the Albion Inn.  However young Henry seems to have followed in his father's previous occupation as he is now listed as a gardener.

In 1900 John married Harriet Brown in Maidenhead Berkshire.  They continued to run the Albion Inn together, where they can be found on the 1901 Census.  Sadly after nine years of marriage, Harriet passes away, leaving the now twice widowed John alone.

On the 1911 Census, John is listed as a retired publican lodging at 21 Bell Street in Maidenhead Berkshire.  John Neighbour passes away in 1913 in Maidenhead.